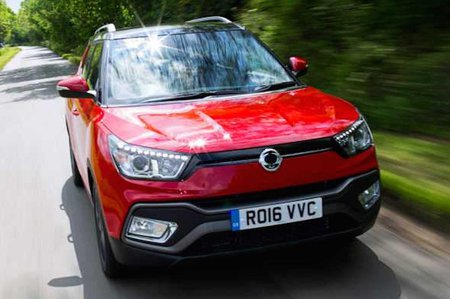 What’s not to like about a car whose name read backward spells “I lov it”? OK, it’s a tad presumptuous but the fact of the matter is the SsangYong Tivoli XLV could carve out a tasty little slice of the mid-size SUV pie in Australia. Sensible packaging, impressive equipment levels, strong warranty and a budget price are marred only by an unremarkable driving experience… and a sub-par safety rating.

How does the Tivoli XLV drive?

SsangYong is planning a big old party in Australia from November 2018, when it relaunches with four models – the Musso dual-cab ute and Rexton large SUV, along with the Tivoli small SUV and Tivoli XLV medium SUV.

We tested all models in Korea recently… except the regular SsangYong Tivoli that could start under $20,000 in Australia, potentially making it the top-seller for the brand.

Nevertheless, we did get a short on- and off-road burl in its longer cousin, the Tivoli XLV, whose all-wheel drive diesel powertrain and big boot give it a point of difference in the small-medium SUV segment. 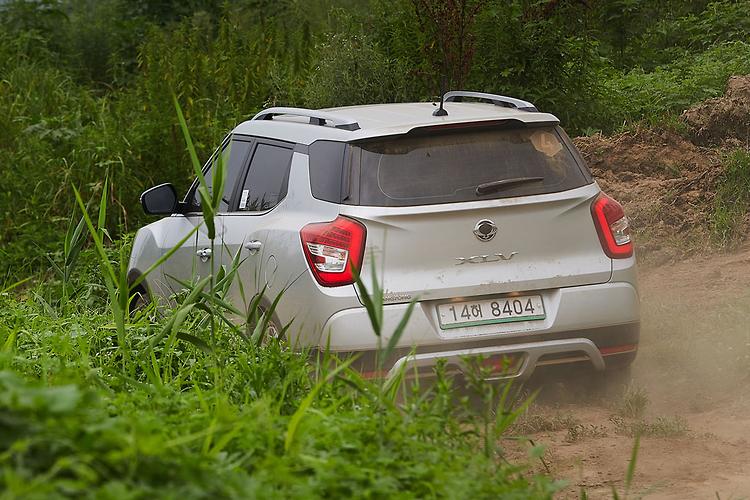 It’s also got an unusual design and of the four new models SsangYong is inserting into the Aussie market, this one is probably the most likely to find small children pointing and laughing at it. Possibly dreaming of vandalising it too. But as the old saying goes, beauty is in the eye of the beholder.

OK so jumping into the SsangYong Tivoli XLV for the first time had me scratching my head. ‘This is an SUV?’, I pondered. More like crossover, given the view from the pilot seat isn’t significantly higher than in some wagons or hatchbacks.

The SsangYong Tivoli XLV mid-size SUV has a 168mm ride height, which is slightly more than the teeny-tiny Mazda CX-3 (155mm) but way off the circa-200mm of ground clearance that most medium SUVs offer. 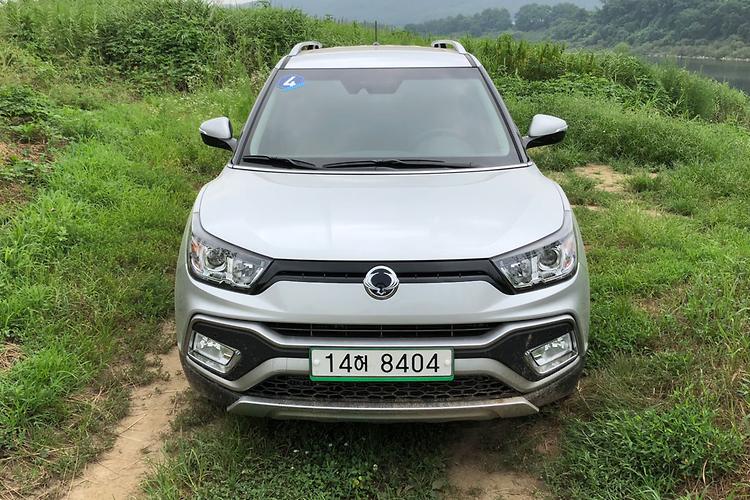 This means sight lines are only slightly better than in passenger cars and the Tivoli XLV also bottomed out a couple of times over the deeper divots in a short off-road track.

To its credit the all-wheel drive system has a locking centre differential that worked well, as did the 1.6-litre turbo-diesel — particularly sloughing through muddy sections.

On the road, the short test drive allowed me to establish that the SsangYong Tivoli XLV is a much more composed vehicle than some of the clunkers the brand used to make, easily navigating its way around Gangnam in Seoul with ease.

The steering is light which makes urban combat easy and the upright windows make it easy to see out of. Parking the vehicle is a doddle thanks to a reversing camera and proximity sensors. Ride comfort is pretty good and the crossover’s independent suspension gives it predictable handling dynamics. 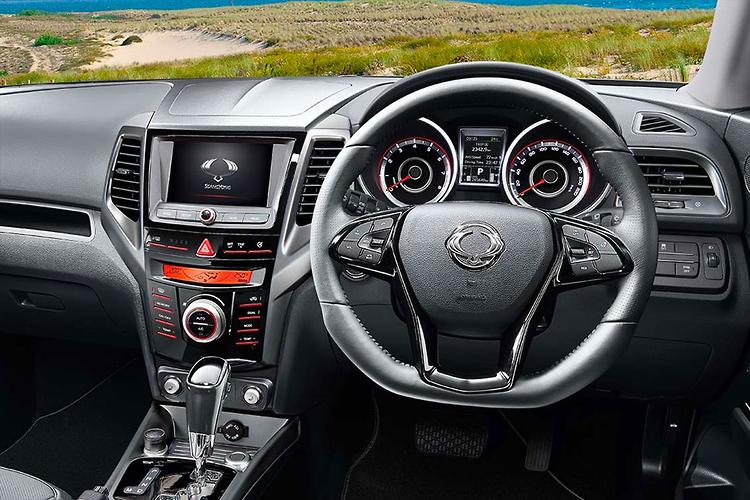 What engine does the Tivoli XLV get?

Only one engine will be offered in Australia: a 1.6-litre turbo-diesel (115kW/300Nm) unit, fitted exclusively to an AWD system, but six-speed manual and auto transmissions will be available.

The seven-seat diesel AWD version takes a claimed 12 seconds to reach 100km/h from standstill, which for a small-ish vehicle with more engine torque (300Nm) than a Volkswagen Polo GTI seems a bit slow.

Indeed, the Tivoli XLV is not the zippiest traffic light hustler. 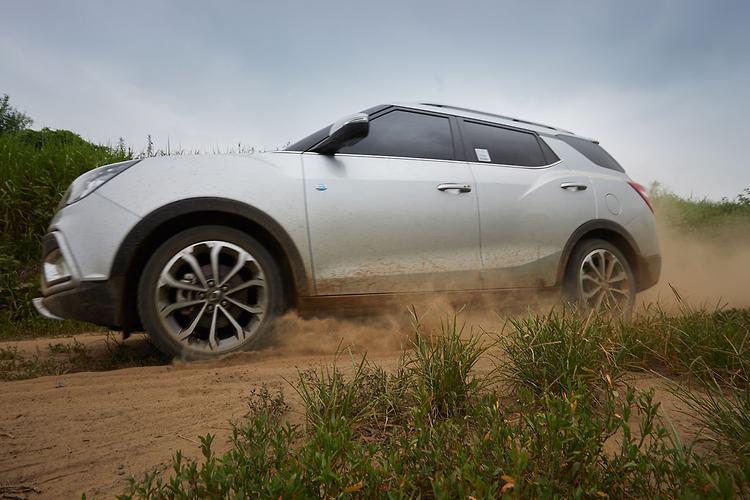 That said, it’s not bad once up and running and, like the other SsangYongs we tested, the diesel engine was smooth and quiet in almost all scenarios. The six-speed automatic transmission is fairly innocuous, with acceptable intelligence and average shift times.

SsangYong reckons the Tivoli XLV will slurp down fuel at a rate of 6.3L/100km, which is typical for this class of vehicle.

It weighs 1535kg, which ain’t light but one thing this vehicle has up its sleeve is a whopping boot and tasty towing capacity – two things that few other small SUVs can deliver.

It will tow an unbraked trailer weighing up to 500kg and a braked trailer of up to 1500kg, meaning small watercraft and boats are very doable. Where’s the jetski?! 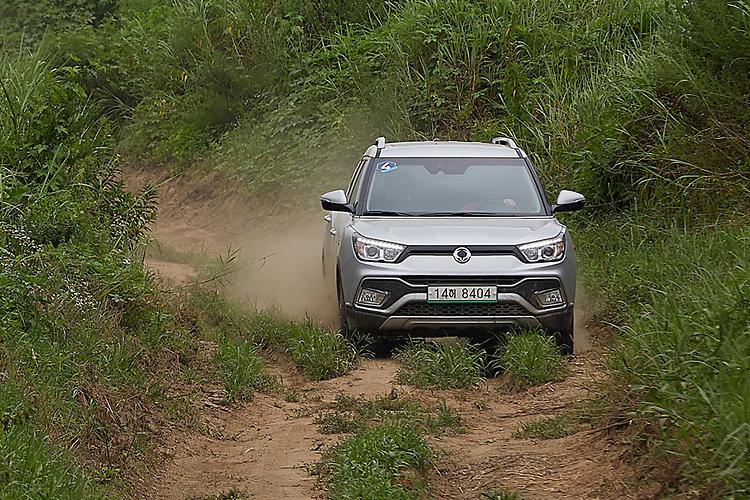 As mentioned, the boot of the SsangYong Tivoli XLV is pretty spacious, although the claimed 720 litres of cargo room – almost 300 litres more than the standard Tivoli – seems excessively generous when you start poking around.

The boot has underfloor compartments that add a bit of utility and, to its credit, the XLV will come with a full-size spare wheel.

In fact, SsangYong Australia managing director Tim Smith said every AWD model in the Korean brand’s range will get a full-size spare. 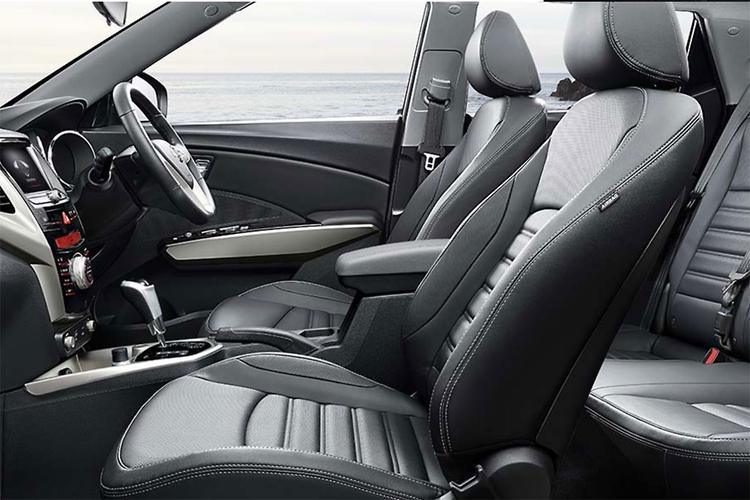 There’s ample space for the driver and front passenger, and plenty of leg room for two adult passengers in the back of this Korean cruiser — three at a pinch.

Compared to the newer Musso and Rexton models however, the Tivoli XLV looks and feels a bit older and simpler inside.

The central console and the buttons for the infotainment aren’t quite as elegant as its bigger ute and SUV siblings, but everything works well.

The front seats aren’t particularly contoured but are supportive and mostly comfy, while the driving controls are where you expect them to be.

There’s a simple trip computer and a good assortment of cruise and audio controls on the steering wheel. For the most part everything works as expected. 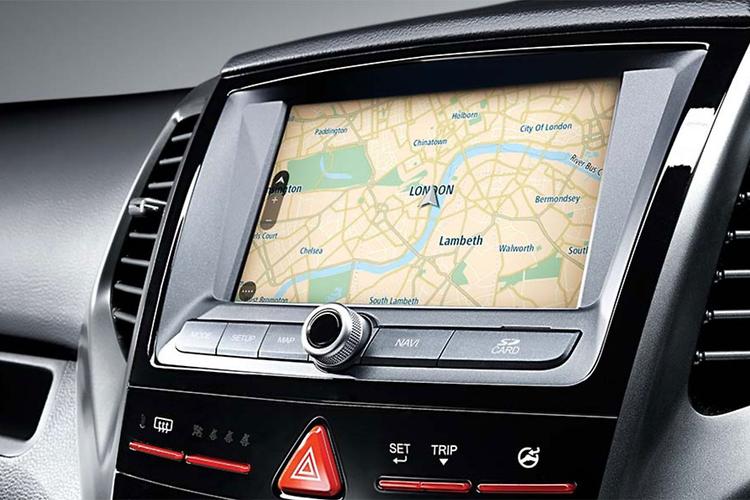 What features does the Tivoli XLV get?

That means it will likely be a more expensive proposition. Don’t expect a sub-$20,000 price here.

Our test car, which was indicative of the Ultimate grade, was packed to the hilt with upmarket features, such as heated and cooled front seats, heated rear seats, sunroof, leather upholstery, automatic headlights, wipers, keyless entry and engine start. 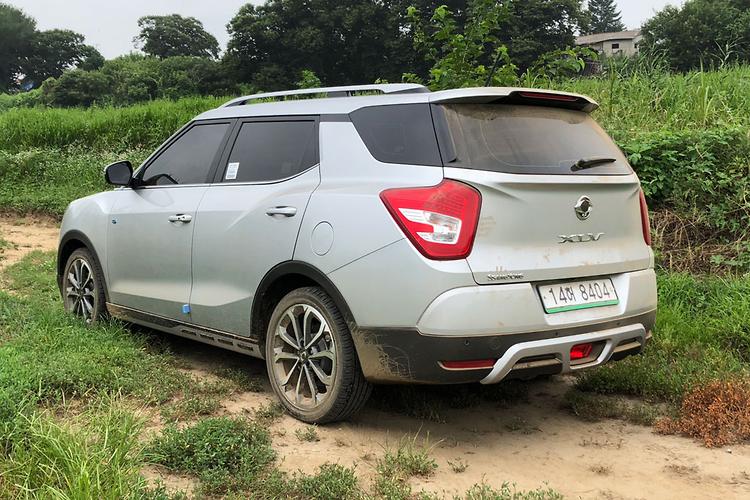 Semi-autonomous driving aids may also be offered in Australia. Think lane keep assist and adaptive cruise control, which would allow the vehicle to steer, accelerate and brake by itself – within reason.

Adaptive high-beam headlights and 18-inch alloy wheels are also likely on Ultimate models, while all Tivolis will get seven airbags, stability control and autonomous emergency braking will be standard.

Despite this the SsangYong Tivoli XLV will be sold in Australia with a four-star Euro NCAP safety rating. The South Korean brand is plotting a Tivoli update in August 2019, when it will retest the updated model to try and nab a five-star score.

Euro NCAP’s reason for not giving the Tivoli five stars? The “…proper retention of the rear [seated crash-test] dummy failed, allowing excessive forward movement and protection of the head was rated as poor. As a result, the Tivoli lost all points for that dummy.” 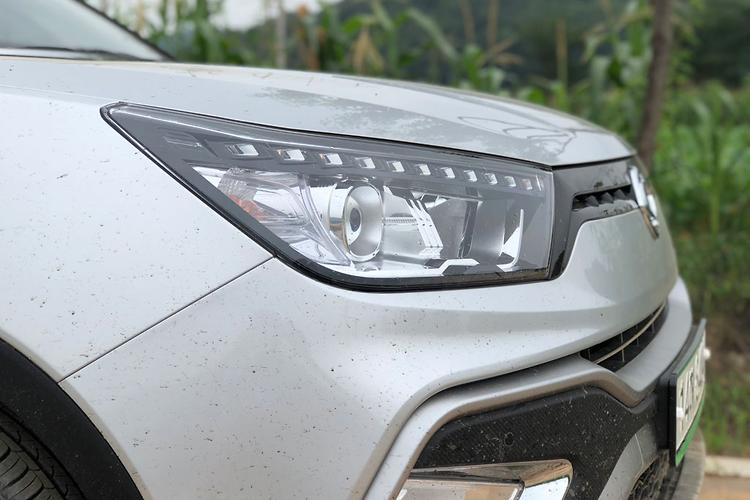 “SsangYong are investigating the cause of the failure,” said Euro NCAP.

If you thought the little “I lov it” play on words was cool, you’ll dig the XLV meaning – eXciting smart Lifestyle Vehicle. Hmmm… shouldn’t it be the Tivoli ESLV, then?

In all seriousness, this small crossover vehicle could be worth investigating if the price and warranty are compelling. I reckon it could perform well against some rivals in a comparison, too.

Do “I lov it?” No, not really… but I don’t hate it either. The new SsangYong Tivoli XLV is unlikely to have the Honda CR-V and Mitsubishi Outlander quaking in their boots.

But if the Korean challenger brand puts together a tasty drive-away deal when vehicles start arriving in November, it may curry favour with budget-conscious seven-seat crossover buyers.

The back seats fold flat 60:40 to turn the XLV into a little carpet-lined van, albeit without the remarkable efficiency of the Honda’s ‘Magic Seats’. They also recline up to 32.5 degrees to accommodate snoozing.

There’s ample head room and pretty decent leg room for two adults in the second row, though taller occupants will graze their knees on the (easy to clean) hard plastic front seat-backs.

Cabin storage options are manifold, including bottle holders in all four doors, a centre console that fits an iPad, large glovebox and an open area running above the front passenger’s knees.

While the interior design of the brand-new Rexton is positively upmarket, the XLV’s feels a half-step behind the class leaders. The quality of the plastics used along the transmission tunnel and on the fascia is a little ‘cheap’, for one.

On the upside, there are various colour schemes available, with lairy red leather seats an option, as well as various contrasting door cards and backlight colours on the Suzuki-style analogue instrument cluster available.

We should note that a mid-cycle update will come within one year of the XLV arriving in Australia, with what SsangYong says will be a more upscale interior layout. Such are the challenges of relaunching a brand with products well into their life cycle.

Standard features should include a 7.0-inch touchscreen, cruise control, Bluetooth and a rear camera, while features such as leather seats with heating and ventilation, a sunroof, satellite navigation, climate control, and a proximity key will be available. Final specs will be announced closer to launch.

However, the XLV only has a four-star Euro NCAP crash score, which is sub-par. Read the report on that here.

One of the XLV’s differentiators/headwinds (depending on perspective) will be its diesel engine in a class dominated by petrol power. While the Tivoli will get a 1.6-litre petrol engine, its 94kW/160Nm outputs were deemed a little low for the heavier XLV.

Thus, the sole engine will be a 1.6-litre turbo diesel making 85kW of power and a potent 300Nm of torque from just 1500rpm. Claimed combined-cycle fuel use is as low as 5.9L/100km, while the braked towing capacity is a decent-for-the-class 1500kg.

Both front-wheel drive (FWD) and all-wheel drive (AWD) configurations can be had, the latter which can send up to 60 per cent of torque to the rear or be locked at 50:50. You can also expect both six-speed manual and six-speed automatic transmissions.

The engine is a little coarse and clattery, but it offers substantial pulling power from just off idle, and might present a compelling case to anyone keen on towing a small trailer, or who lives in a regional area and does a lot of miles.

Dynamically, the FWD models get a basic torsion beam rear suspension arrangement, while the AWDs get multi-link. All get electric-assisted steering with three resistance-level modes.

We drove the XLV briefly on some smooth Korean bitumen and over a basic off-road coarse. We noticed some distinct body roll through corners, and a little bit of busyness over sharp inputs, especially on models with bigger 18-inch wheels.

The fact SsangYong has flagged a program to tune the suspension of its vehicles in Australia, à la Hyundai/Kia, suggests it’s aware that its vehicles need some tweaks. That said, few cars in this class are dynamic paragons. We will wait for a local steer to give a final verdict.

The other side of the coin is warranty. SsangYong’s global minimum is five years, though in the UK its distributor offers a seven-year/150,000-mile policy on certain models. We’d hope SsangYong Australia matches Kia with a seven-year term of its own. It has indicated it wants to do this very thing.

In terms of pricing, the XLV’s rare-for-the-class diesel engine means it’ll sit at a slightly higher price point than it otherwise would have. As such, the shorter Tivoli will be the real price-leader, kicking off around the $20,000 mark.

We’d suggest the XLV needs to sit 10–15 per cent below the CX-3 and ASX diesels, though that seems like a tough ask. Once the MY19/20 update arrives with its more sophisticated cabin, the company may be in a position to re-evaluate.

It will require some time to carve its path, but then again, having such a spacious interior and a diesel drivetrain at least gives it some clear differentiators from the mainstream. Once we know the pricing, we can be a little more definitive.

There’s no doubt, though, that SsangYong’s broader range of offerings will set it in good stead to make a better fist of things this time around.

Want more? Listen to the full discussion below and catch more of the CarAdvice podcast here .